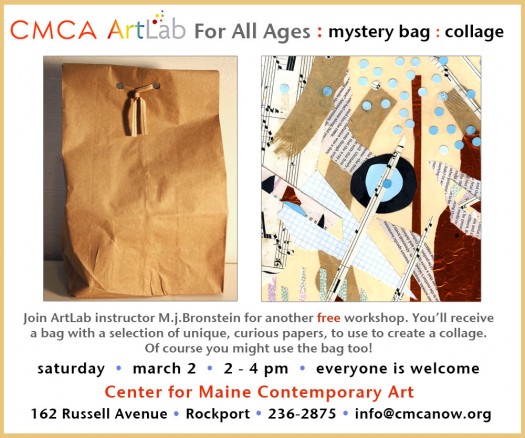 This past weekend at the CMCA ArtLab, the room was overflowing. With people, paper, and lots of late-winter creative energy. 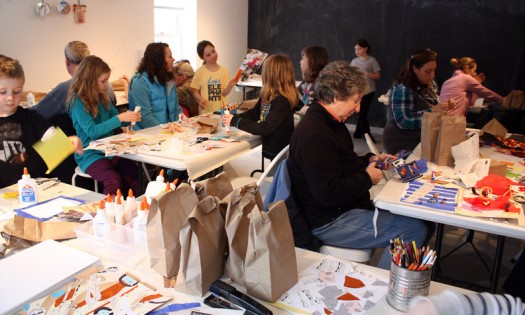 There were small children with Grandparents, 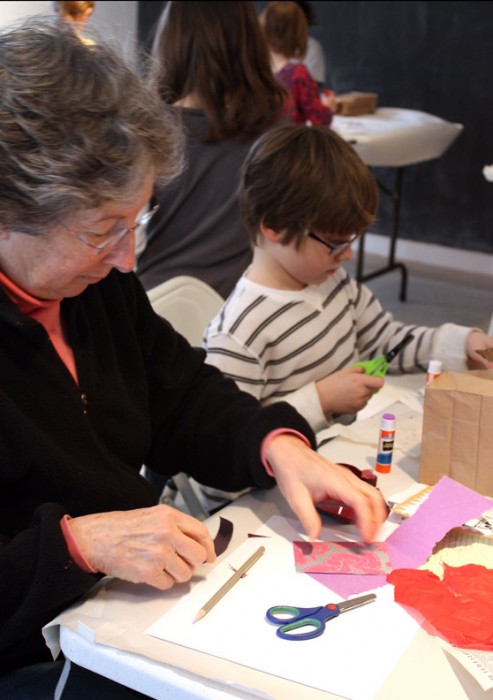 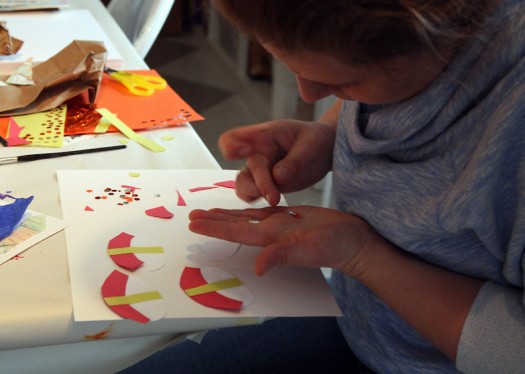 families working collaboratively, and kids working alone, but at a table with friends. 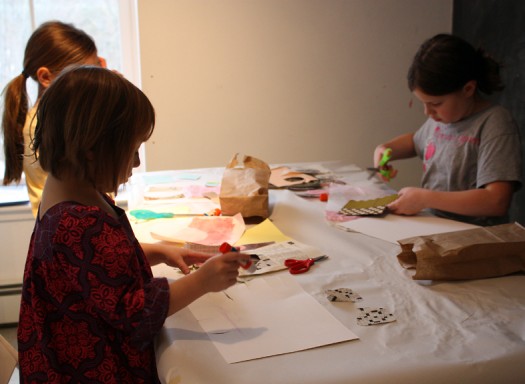 Everyone was given a brown paper bag with a selection of 6 -8 pieces of paper: maps, sheet music, colored paper, patterned paper, phone book pages, etc. 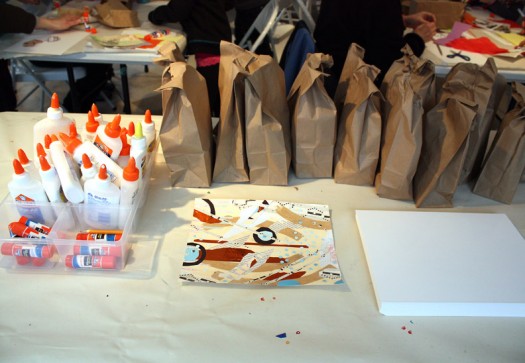 Each person was also given a heavy piece of tagboard, a glue stick and a pair of scissors. Because this is ArtLab, there were pointedly no “instructions,” but there was some talk about the powerful choice (distinction) in collage, between cutting paper and tearing it. 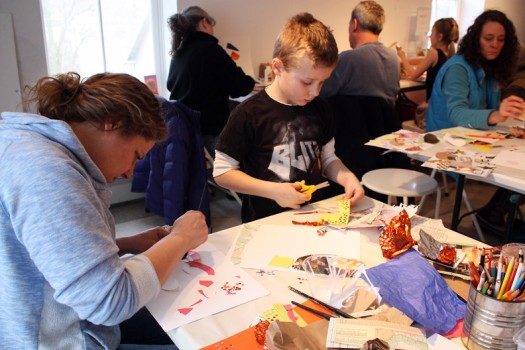 ArtLab workshops are always pointedly not instructional. While there’s usually an example of a completed project at the front of the room, it’s always presented as just one possibility, or a point of departure. 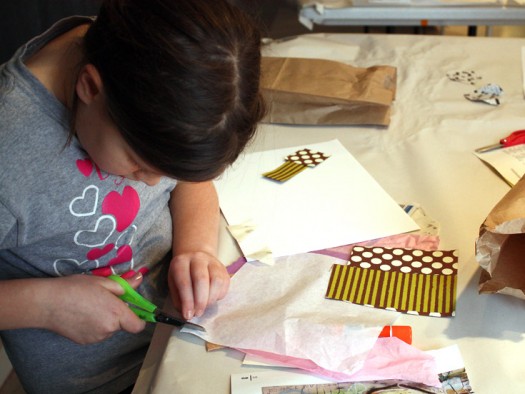 When “technique” is not given a starring role, there’s much more room for experimentation. For example, one boy finished his work in about 8 minutes, announcing those most-often-spoken-in-a-classroom words, “I’m done.” When I asked him if he wanted to make another, he said no. He seemed bored. 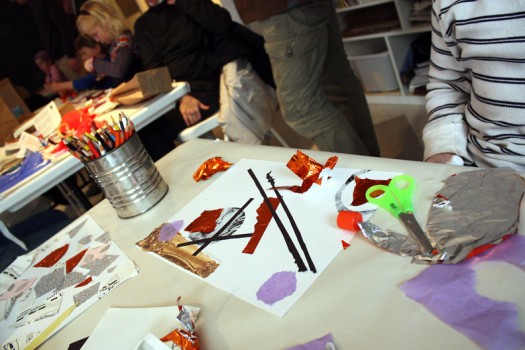 Then I asked if he wanted to work with me collaboratively, as a team. He had never worked this way before, but was interested. 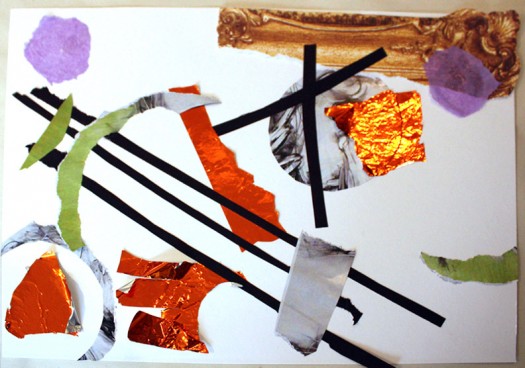 We worked side-by-side for nearly the next hour, taking turns, talking, and not talking. Together we made the piece above. 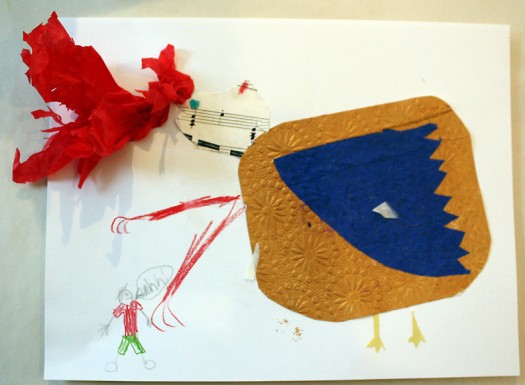 When technique is not introduced as a means to an end there’s a sense of openness in the room. (Everyone seems to feel it. Though there are people, most always adults, who seem anxious in the absence of “directions.” Many times I’ve heard parents trying to direct or edit their children by telling them to “make it pretty” or less sloppy or whatever. At this point I might ask the parent if they’d like to work on their own piece.) After more than a year of observing people in the ArtLab, I’m even more passionate about the importance of creating a sense of open space, if only for two hours in an afternoon. So that a young girl can create a flat collage of a dragon with three dimensional fire 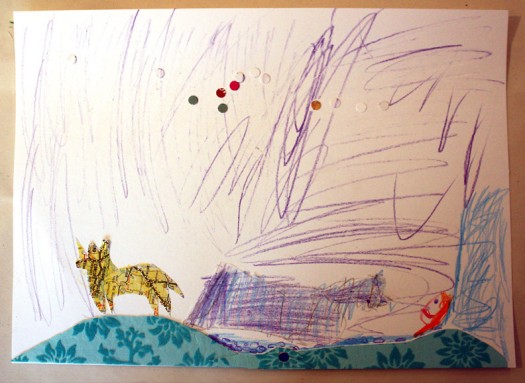 and follow that up with a second narrative piece, that illustrates a favorite chapter in a book she’s reading. There’s a unicorn, a “lake that reflects wishes” and punched circles in the sky that are stars. Her first piece led to her second because of what she discovered by working in her own way at her own pace. 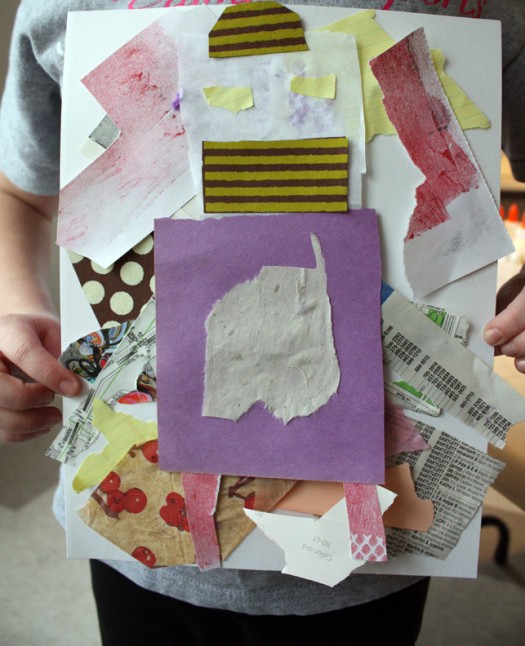 In the ArtLab, one person will make a figure with torn and cut shapes 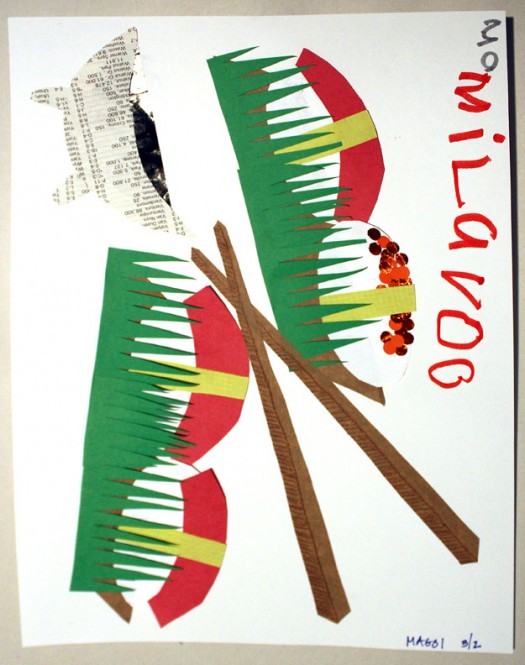 and nearby, someone else will make a more minimally designed piece of distinctive clean cut shapes and lots of white space. 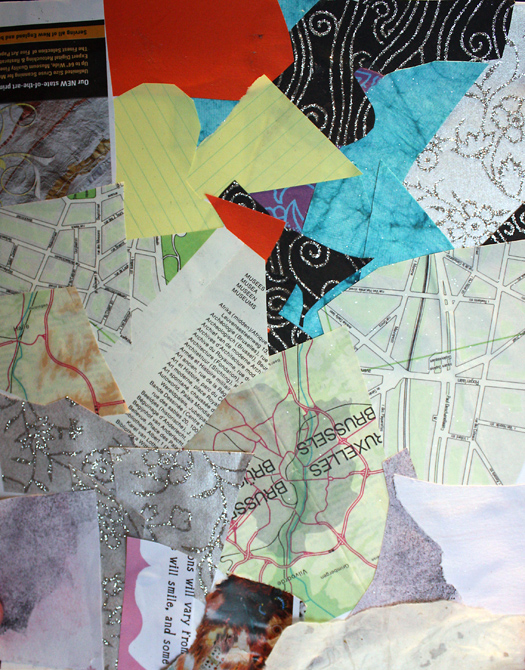 Some people fully filled the page with flat layers of color and pattern, while others felt free to move away, up, out, and beyond the page… 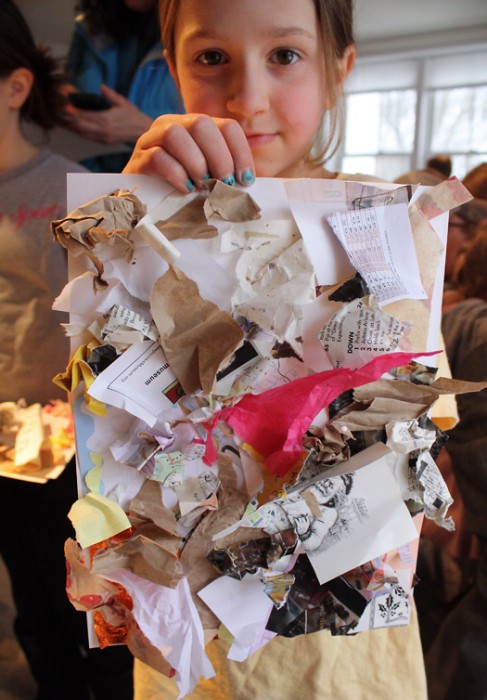 All of this is not to say that teaching and learning refined skills and technique, in the right space and time, are not important and exciting. This is obvious. 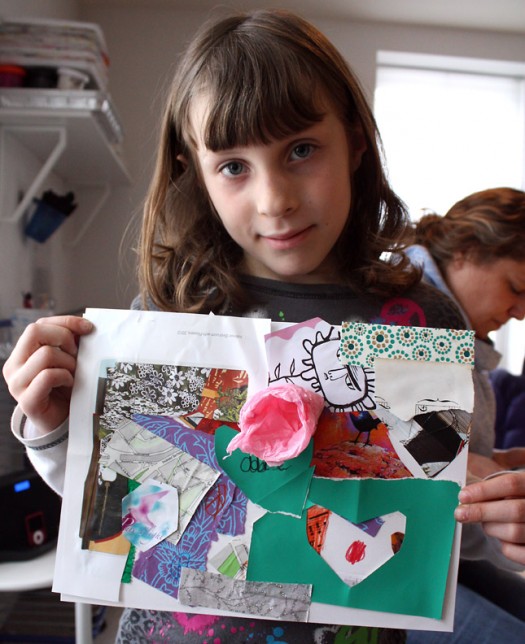 But what might not be as obvious is how important and exciting it is to have spaces where we can go, to be with people we know and don’t know, of all ages, 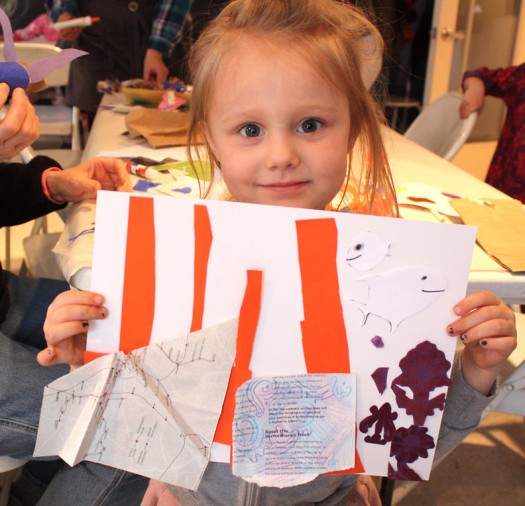 to dive into color, shapes, materials and our own unpredictable flow of ideas, 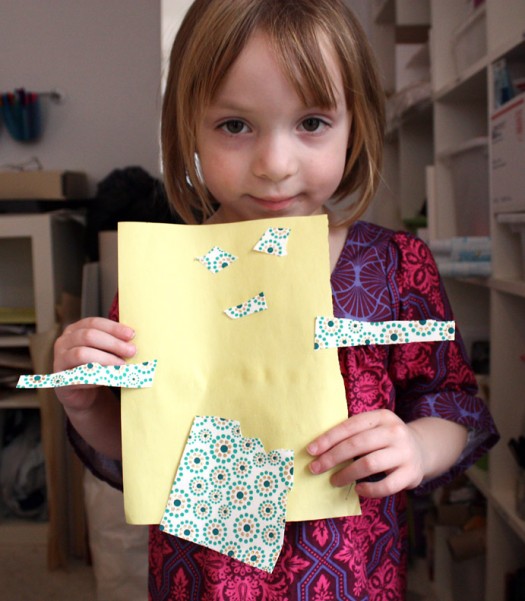 to create something that’s uniquely, of that moment only, ours.