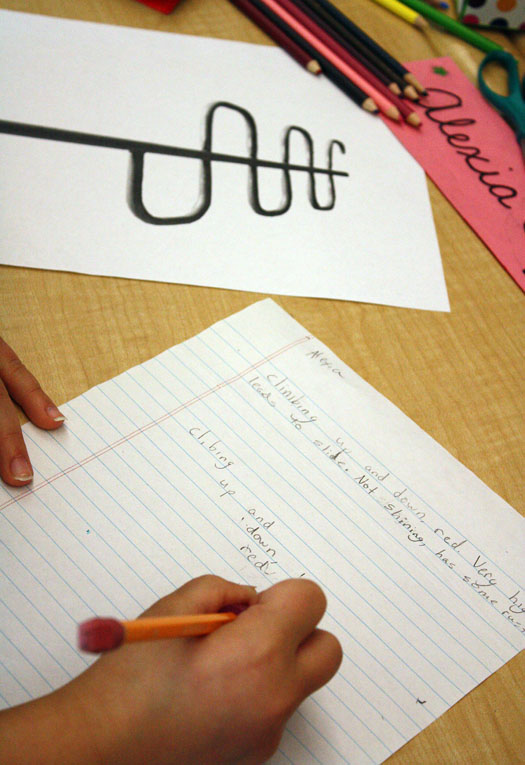 Yesterday was the third day of my residency at the Camden Rockport Elementary School. We moved from working solely on my photographs, to constructing concrete poems, using the photographs, or pieces of the photographs as visual components. After watching the students read, write, and then speak about poems (theirs and mine), I have to say that it’s bewildering to know that poetry does not remain, front and center, in the lives of most people. As the children participated in a dialogue about words and how they can be composed on the page to amplify their meaning, there was a feeling of electricity in the room. Brain power and heart power buzzing in the air, as ideas and feeling took shape, and most importantly, were expressed.

Some children stayed on the playground, using my photographs in a direct, literal way to express the joy of playing, sliding, climbing… 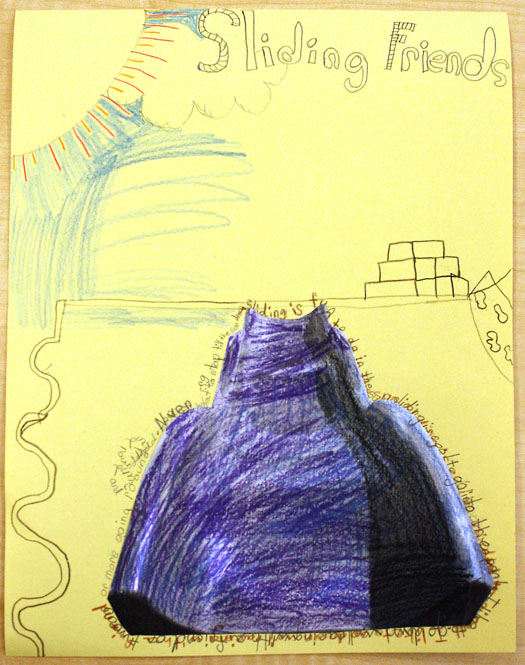 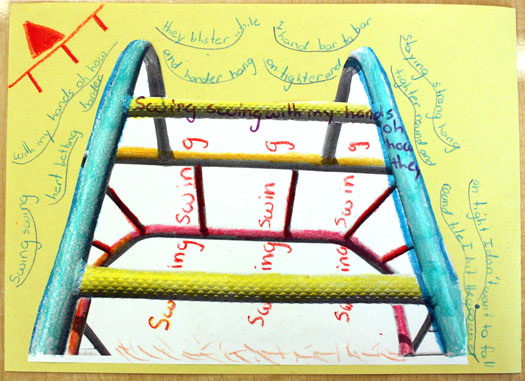 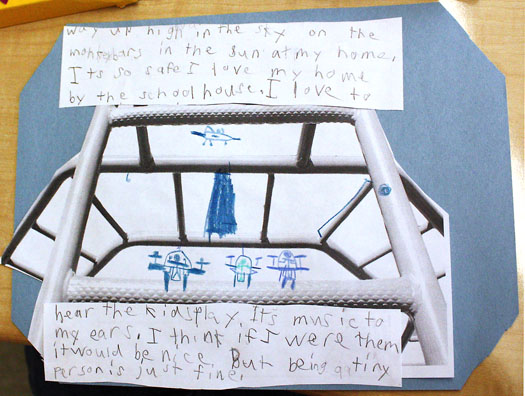 Way up in the sky on the monkey bars in the sun at my home. / It’s so safe I love my home by the schoolhouse. / I love to hear the kids play. / It’s music to my ears. / I think if I were them it would be nice. / But being a tiny person is just fine.

I walk in the woods and there I see a W I D E river coming DOWN from the mountain and three big fish are jumping in the River. 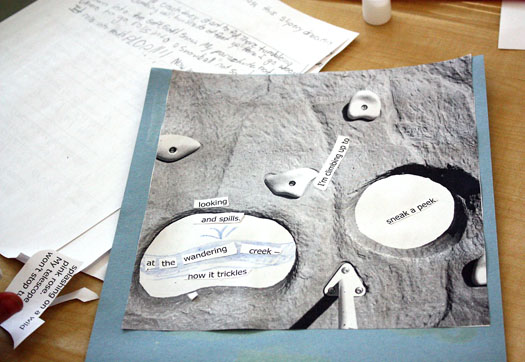 I’m climbing up to sneak a peek / Looking at the wandering creek–how it trickles / splashing on a wild pink rose. / My telescope won’t stop turning round. 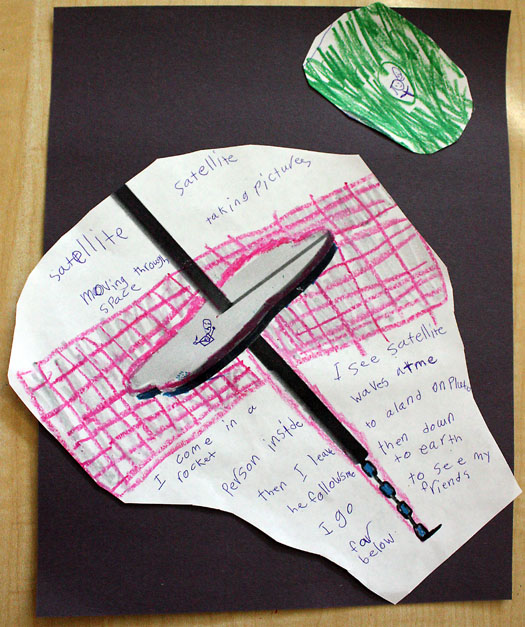 Satellite Satellite: Moving through space / taking pictures / I come in a rocket /I see satellite / person inside / waves at me / then I leave / to a land on Pluto / he follows me /then down to earth / I go far below / to see my friends 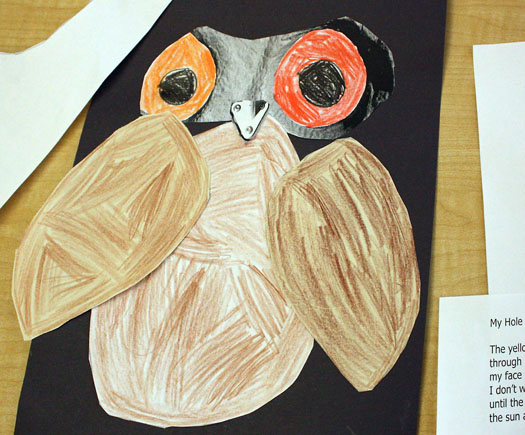 My Hole : The yellow sun shines through my hole / My face feels warm. / I don’t want to move until the cloud blows the sun away. 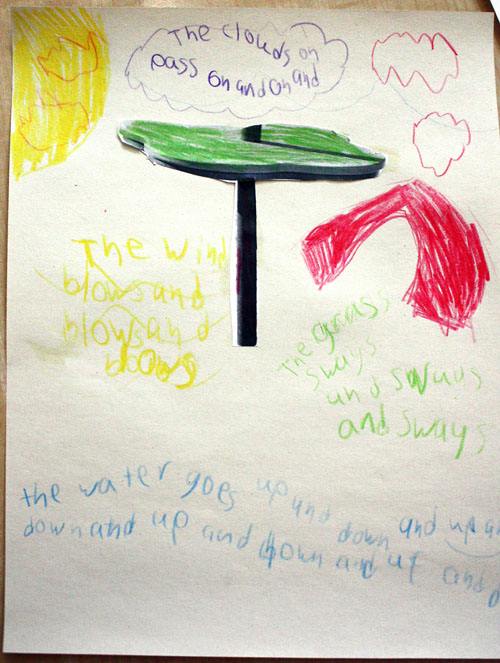 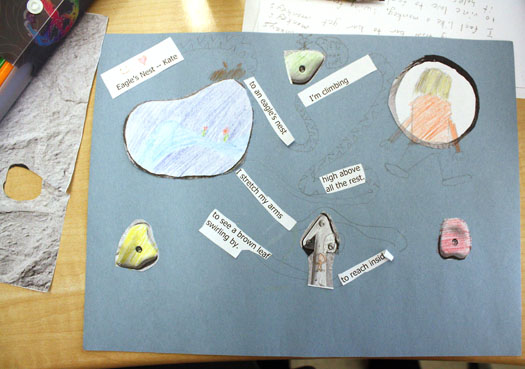 Eagle’s Nest by Kate / I’m climbing to an eagle’s nest / high above all the rest / I stretch my arms / to reach inside / to see a brown leaf swirling by.

Some children found their poems in the process of improvising in the truest sense of the word.  The young boy who made the concrete poem below began by cutting out that wonderful, amorphous shape. It was amorphous when he created it because he was just cutting, just exploring shape and form by editing and reshaping my photograph. After awhile he set it aside and began playing with some other ideas…he was not writing words, not composing a poem for most of the class session. Then toward the end, he went back to the shape below, glued it to the center of another piece of paper, and saw something in what he had done. The poem flowed from there… 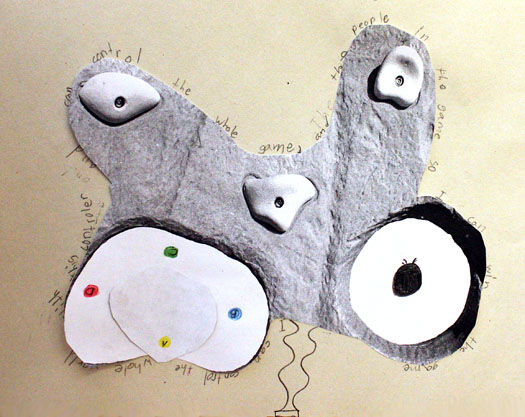