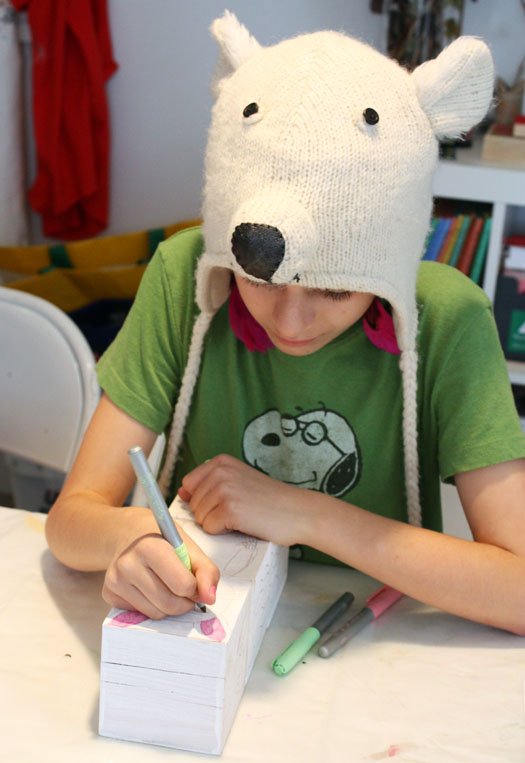 Yesterday’s ArtLab workshop at the Center for Maine Contemporary Art was filled with adults and children of all ages, who focused like laser beams on the three cubes they received when they arrived. In an earlier post, I wrote about the preparation for this workshop, and how it was no small endeavor. We spent at least six hours cutting, sanding, and gesso-ing the cubes in preparation for thirty families. But as I also wrote, it is really worth it. This is one of my favorite projects to observe, and at the same time it’s been a personal obsession for a few years. On so many levels, there’s a sense of infinity about designing cubes and making connections between them. And as always, everyone has an approach, a style, and a unique story to tell. 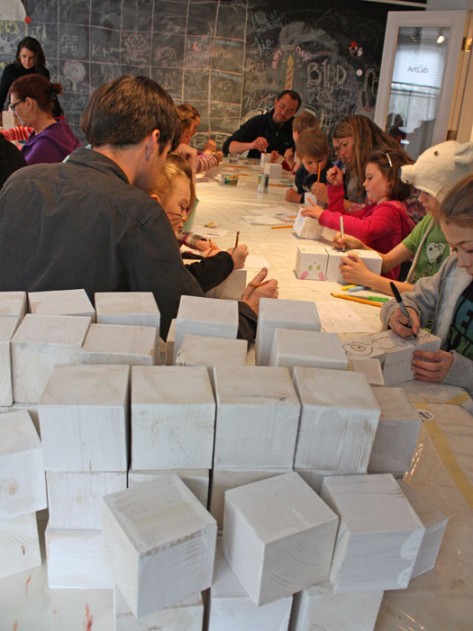 The supply table was filled with stacks of prepared cubes 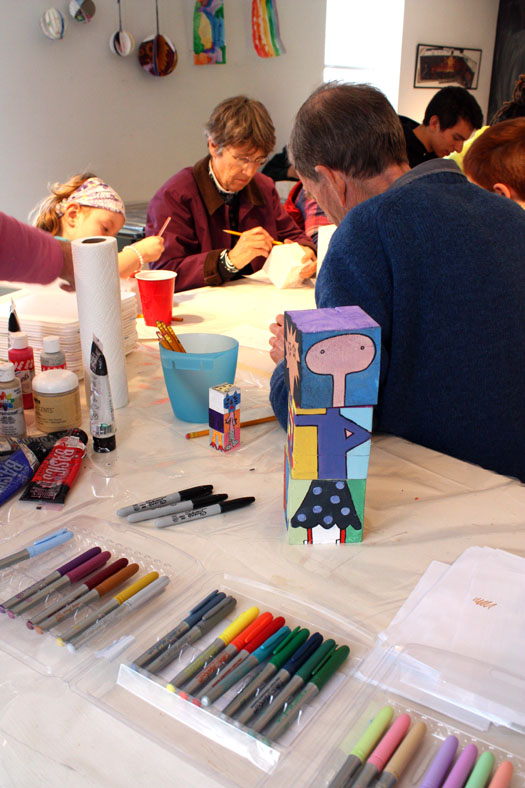 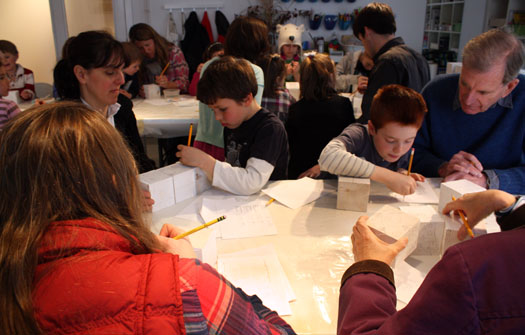 Adults worked collaboratively with children to design the cubes 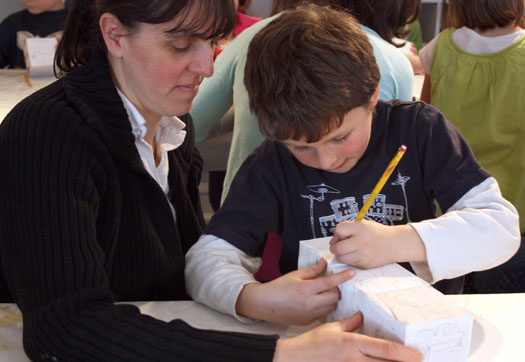 and sometimes they worked as assistants where the child was the lead artist. 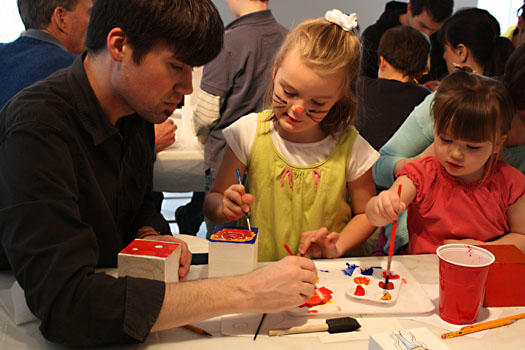 There were also families who made a plan of design for the set, regarding color palette or theme, and then each completed one block. 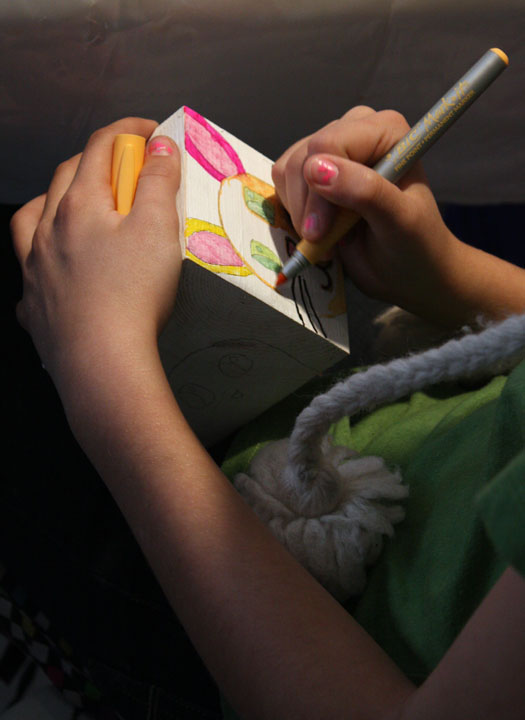 Some children worked–in silence– on their own set of cubes. 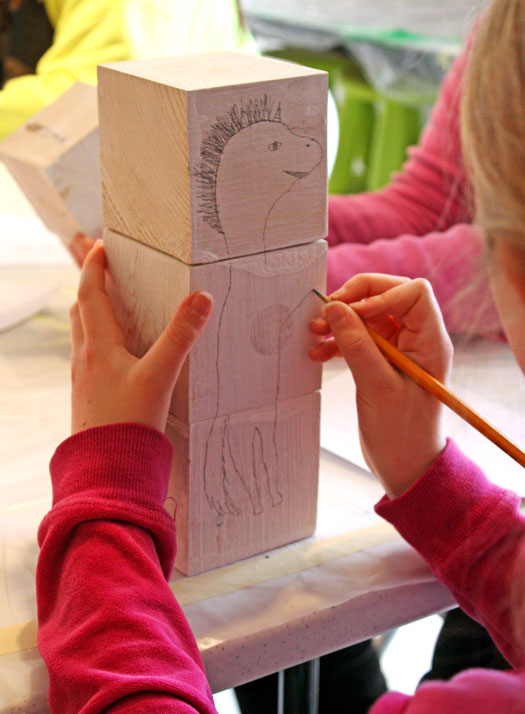 Some chose to draw with pencil, designing three sides at a time… 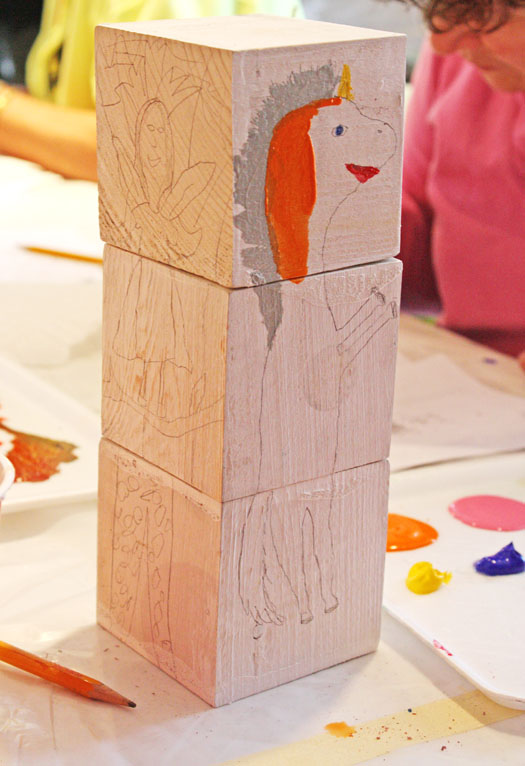 and adding paint, as a painter approaching a canvas, moving back and forth between the whole and its parts. 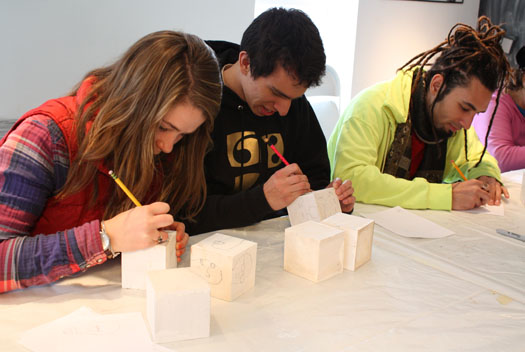 It is truly a project for all ages, everyone with the same level of focus and enthusiasm. 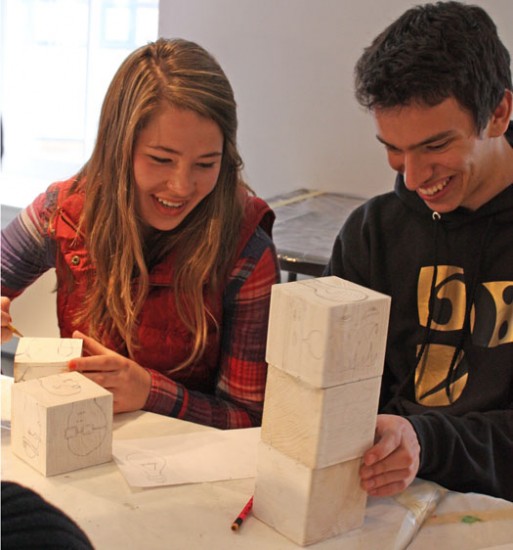 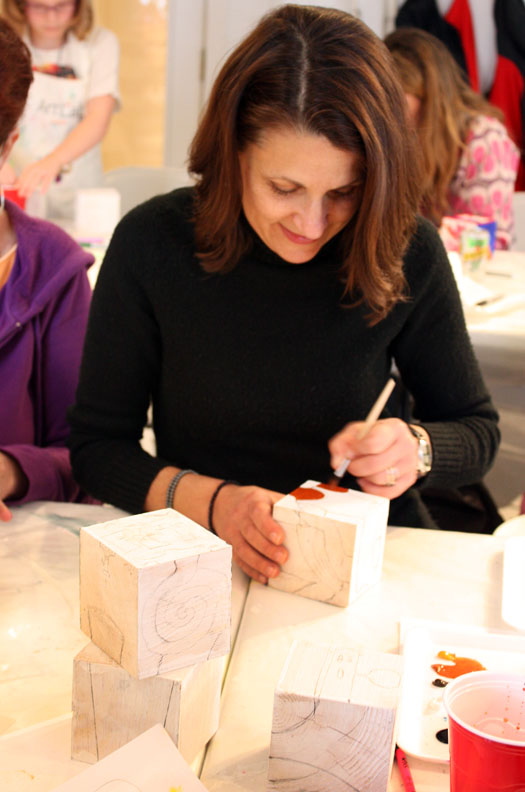 I would go so far as to say that it’s irresistible. In the photo above, you see Suzette McAvoy, the Director of CMCA, who jumped in as well. 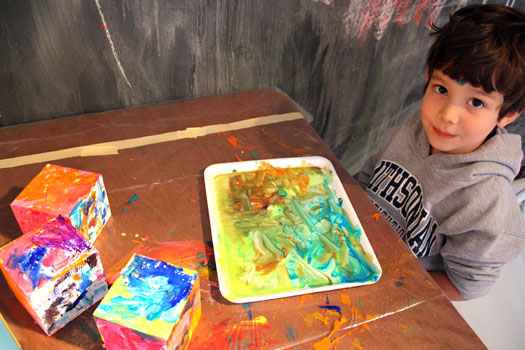 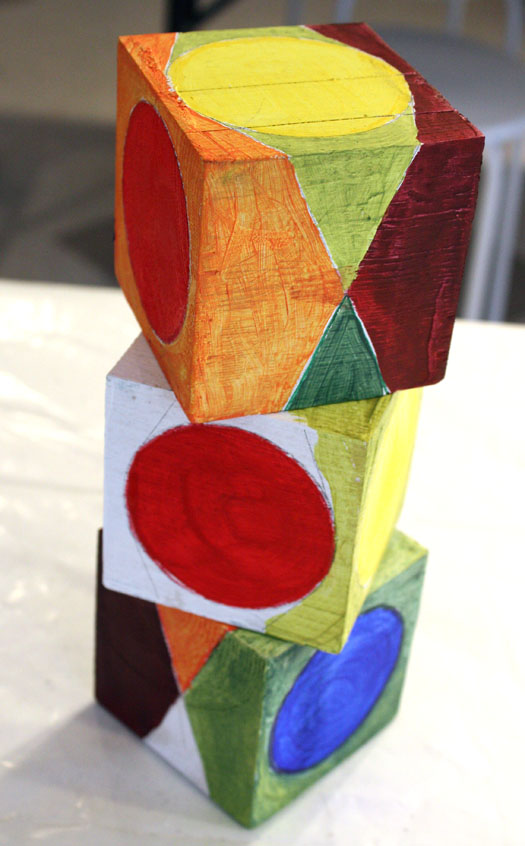 The next few photographs show multiple views of the same set of cubes. 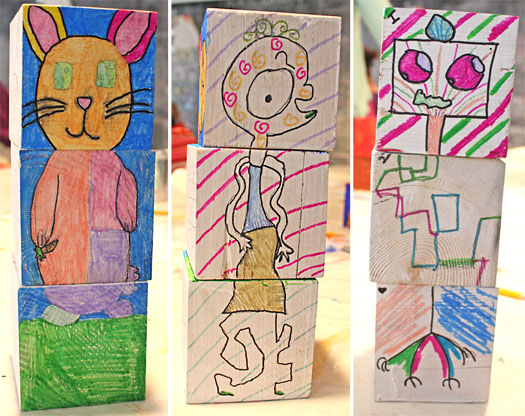 Below is a set that I’m working on… 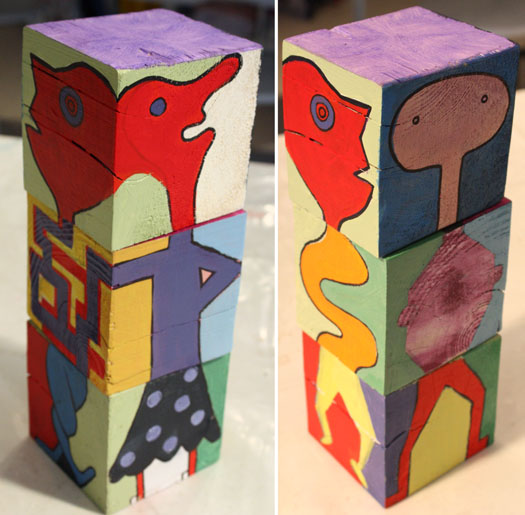 And the work below is by young artist/designer Elizabeth McAvoy, a high school senior, who, not surprisingly, is on her way to the Rhode Island School of Design. 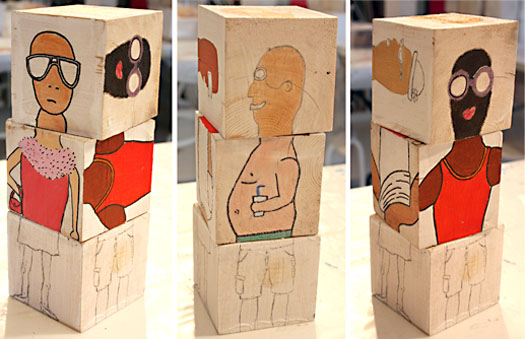 This work was created by a team of a Grandfather and his Grandson. The cubes are scrambled here, but there’s a story of a rabbit, a dinosaur, and a gaff-rigged sailboat with a large octopus beneath the sea. 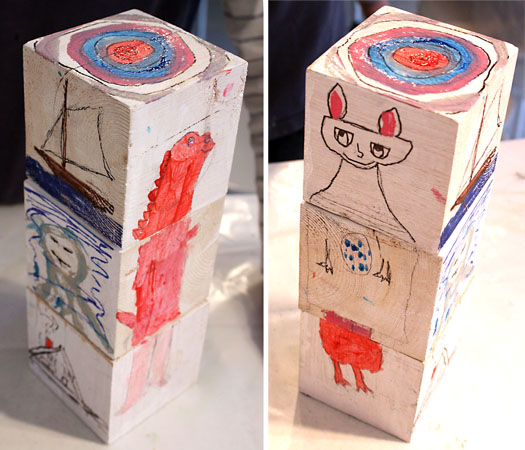 In the work below, five year old Eliza approached the cubes in a way I had never considered: She used the sides of the cubes to tell a story: “A flower needs the sun and water to grow.” and “The stegosaurus (middle bottom) is walking over the mountain up to the sky.” 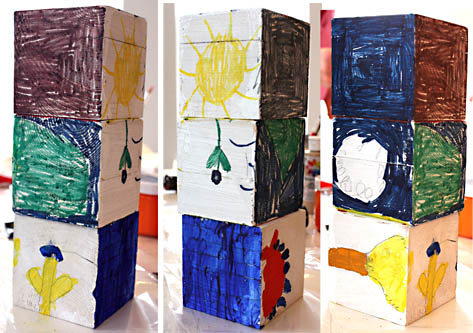 And this work was designed by Elissa and Andrew, a mother/son team who played with so many ideas 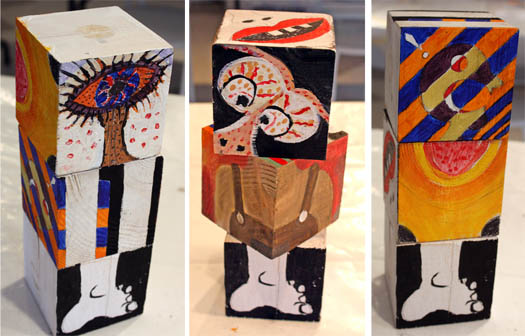 including this one, which opens yet another door to infinity. 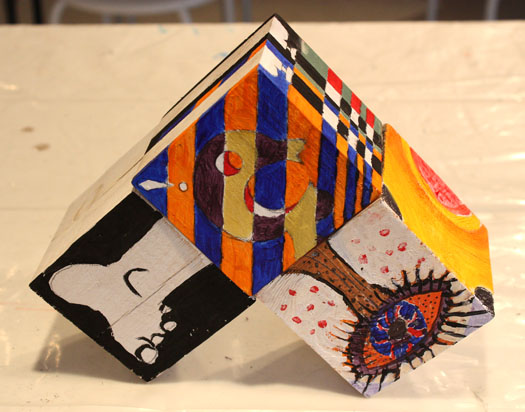