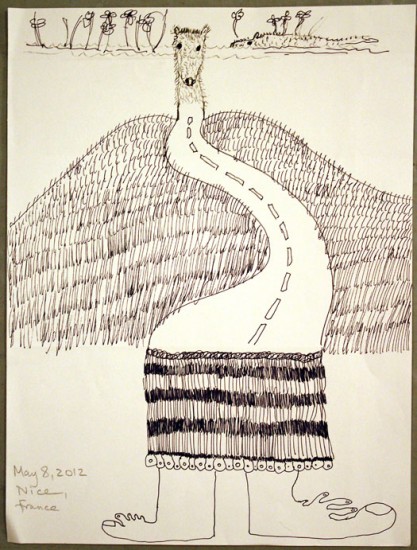 I’ve written a few times before about exquisite corpse, the wonderful drawing game made popular by the Surrealists, where heads, torsos, and legs (or top, middle, bottom) are created by three people, each drawing their own part, without seeing what the others have drawn, on a section of folded paper. In an earlier post, I wrote about how exquisite corpse is a ritualistic part of the day when traveling with my family. We love it because it’s fun to draw at the dinner table, and we love it because of the mystical synchronicity that’s always there, connecting the three disparate parts into a uniquely energized whole. 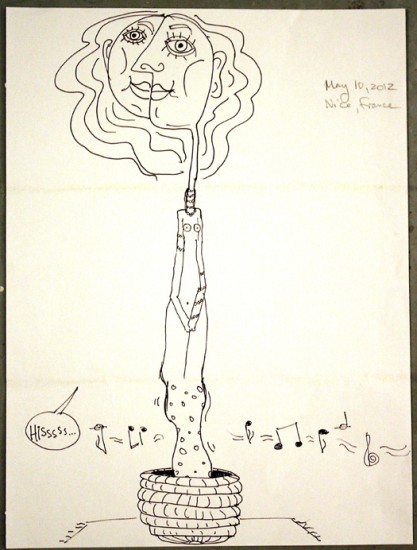 But I haven’t yet written about another dimension of our made-while-traveling nightly ritual which I now see (after returning from a trip to France) as one of the best reasons to take a moment each day with your traveling companions to make an exquisite corpse drawing: it’s really a collaborative travel journal. 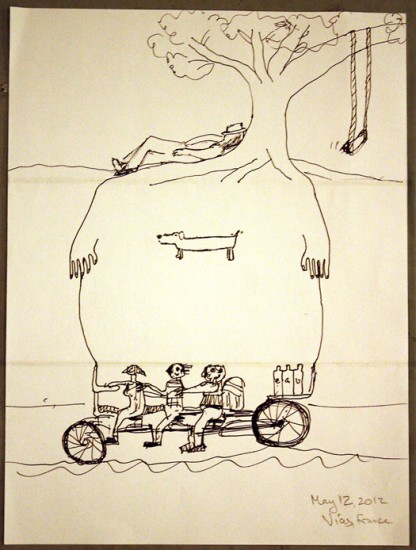 And because each of us (as the great Rashomon effect confirms) notices, focuses on, and chooses to remember different things, collaborative journaling, in the form of hand-drawn images rather than words, casts a unique net. 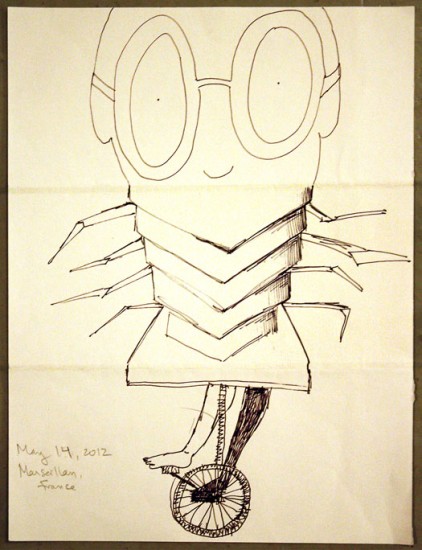 It moves both backward into the shared activities of the day, and inward, deep down inside the memories and imagination of the draw-ers, creating a multi-dimensional portrait of the day, that even I, as a lifelong lover of photographic images, think surpasses in so many ways, those kinds of documents. 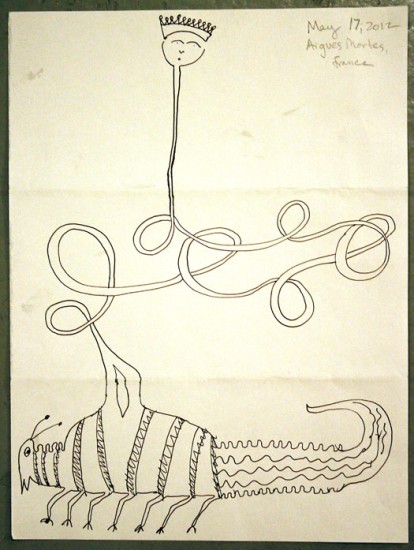 So that the evening after visiting a medieval fortified town surrounded by ramparts, a Queen’s crown hovers at the top of a drawing that moves through a sinuous labyrinth down onto an insectile, crenelated-like-a-castle base. 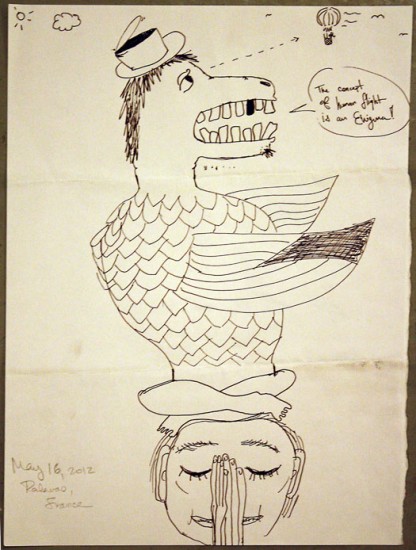 Or, after one day seeing so so many different species of birds (and a donkey) alongside a canal, a collaborative exquisite corpse journal page might focus on flight…and also stillness… 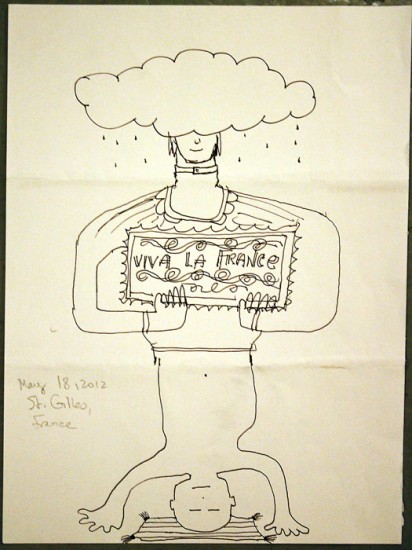 Collaboratively created hand-drawn images are like a massive visual congregation, of the events of the day, the weather, those bulls you came upon, running through the streets, 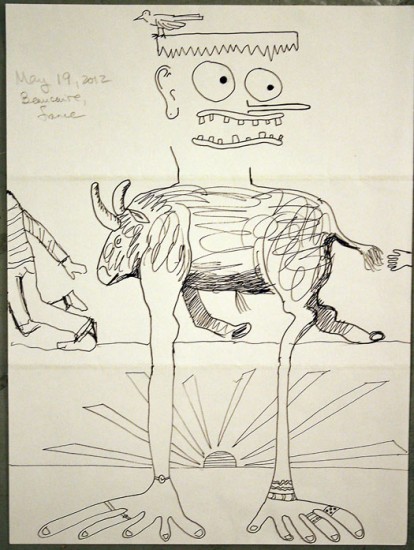 and those lingering waves of sound and street music, that in the form of exquisite corpse, turn into an unplanned tuning fork with a bull’s head. 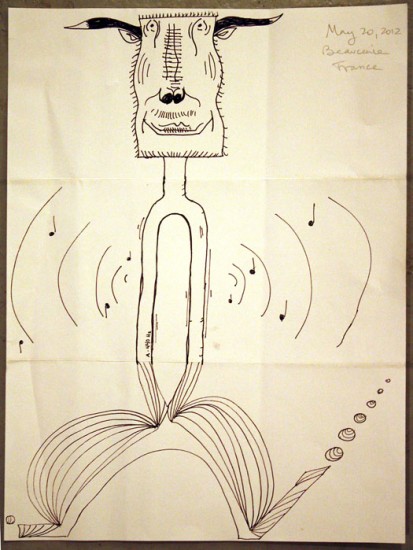 When collaborative journaling really becomes a daily ritual, there’s an accumulation of ideas–thematic, stylistic, informational– that inevitably build and seep out into drawings that, as the trip goes on, begin to summarize the experience, the itinerary, people you’ve met along the way… 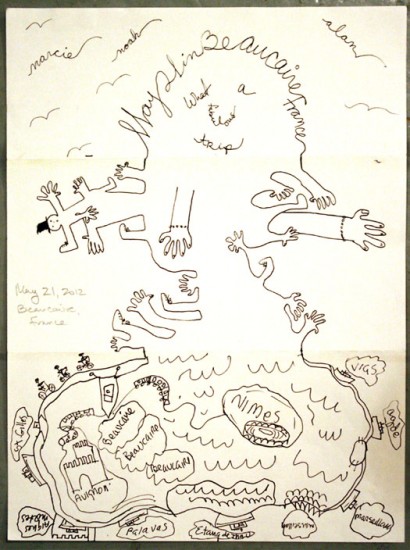 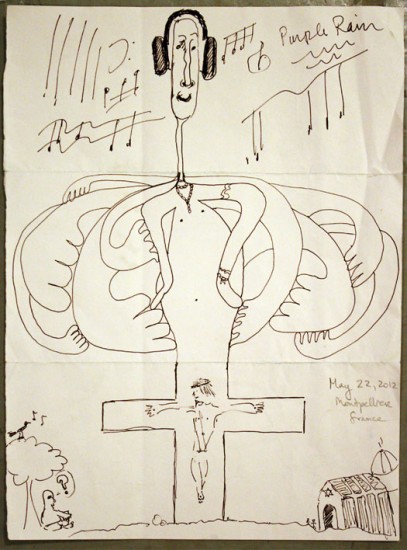 which you can still hear, even as you see the painting of a crucifixion in a museum three towns away, after you pass the synagogue in the dark alley, before you spontaneously jump up and dance together on a boat while listening to Edith Piaf singing on the radio from the heart of her heart.