fotoplay : what does he see? 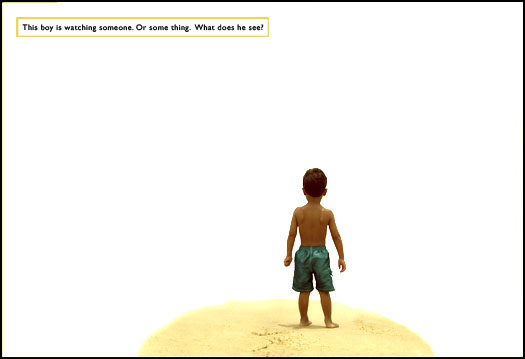 The lovely folks at BIG magazine recently asked me to create a Fotoplay page for their upcoming issue. In a few months, when the magazine is released, I’m going to post about my process, which included about a dozen drafts before I finally resolved the final page. This post isn’t about that work specifically, but something did happen in the process of creating that page for BIG that led to the page above. What happened was that for the first time, I included photographs of children in a Fotoplay composition. The photographs were typical of many of my photographs, in that the children were not (pointedly) identifiable. The photograph then says “children” more than it says “these specific children.” This is exactly what I want for Fotoplay, so that the image I’ve created allows for free association and as uninhibited an approach to the page as possible. I made the page above and yesterday I went, once again, to the wonderful Starrett Center, where the children completed the page with their usual inventiveness, enthusiasm, and sensitivity. 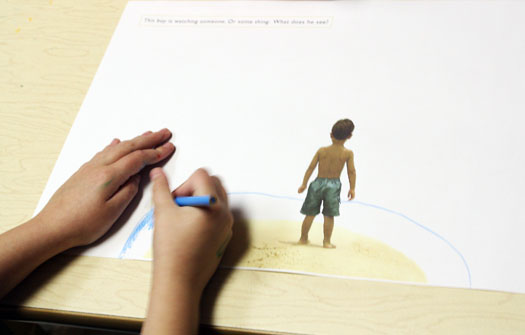 The first girl to begin working immediately created an arc of blue surrounding what she perceived (or intended) to be an island of sand. What happened next happens often. The children around her followed suit, as seen in the page below, which was created by a four year old girl who was sitting in the seat right next to her. The blue arc that inspired so many of the children was really like a prompt, a prompt on top of my Fotoplay page prompt. Because once they grabbed the inspiration of the blue arc, they did not refer to the first girl’s page at all. Each child ran off in their own direction. The four year old whose page you see below, added two “swimmers” in the water (the circular red forms) and her name, written in blue, floating between the swimmers. 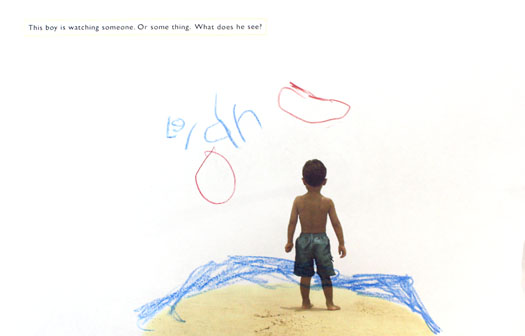 The girl who created the page below added a fish, a fantastic flying/gliding bird, and labeled them in purple. She also took the time to color a small blue box on the back of the boy, but when asked about it, only smiled, allowing it to remain there on the page, unnamed. 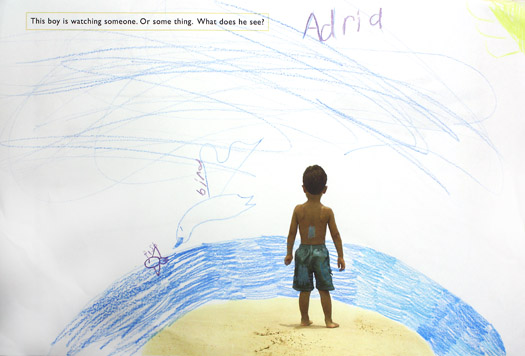 The page below is the completed page which provided the original inspiration of the blue arc. She developed the idea of the island, adding a swimmer and a dolphin, but moving beyond the island to create deep space, with a house, a rabbit (?) and a girl on what looks like another island. Flying in the sky is some sort of saucer. This is a record of what happened, conversationally, amongst the children as they were drawing. Someone suggested that instead of standing on sand or an island, the boy may be on Mars, or another planet. 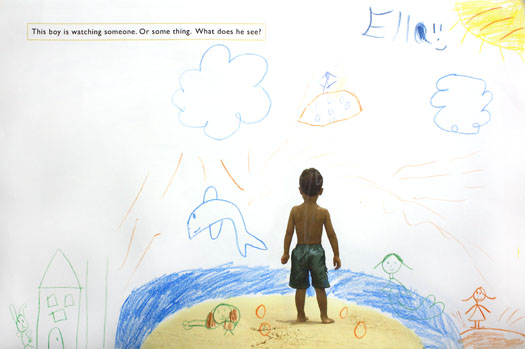 This led to what was the beginning of the drawing below, done by a 13 year old boy. We see two flying saucers, and a number of aliens. Plus we see that this boy has an interest in graffitti… 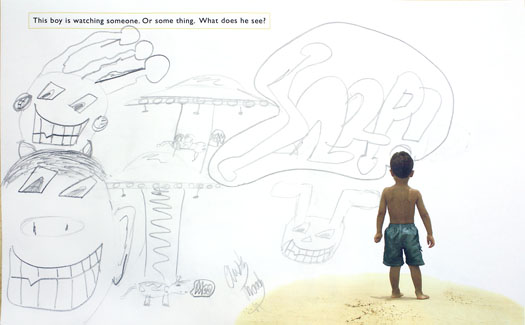 An eight year old girl created the page below, filling the space with a creature that might be a bit frightening. The creature says it “wants to be your friend” but this is clearly a questionable offer. In the boy’s talking bubble are the words “no” and “ahhhh” which the girl spoke out loud for us, with a nervous stutter… ah..aa..ahhh….  I think this young artist was sensitive to the energy in the boy’s stance, and the tight fist of his left hand… 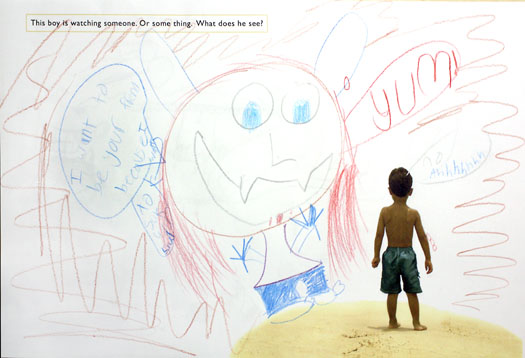 Meanwhile, a four year old boy was working very quietly, completely involved with creating/transferring his own world to the page. 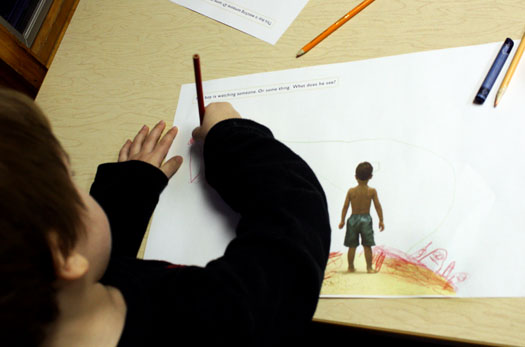 This child has completed a few of my Fotoplay pages before, like the sublime elephant body that you can see at the end of this post.  I’m mesmerized by the work he did on the page below. 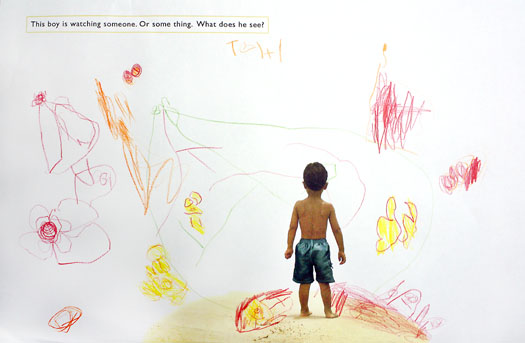 And finally, there’s the page that an 8 year old boy filled with familiar characters (like Bart Simpson and “the guy from South Park”). He did what I have not yet seen on a Fotoplay page: he changed my text to read “This boy is me. I’m watching someone. Or some thing. What do I see?” This was really exciting to me for lots of reasons, but mostly because it confirmed that the use of the photograph of a child in a Fotoplay page can lead to some really strong identification, so much so that the child in the photograph becomes the child artist/director who invents and designs the meaning of the page. 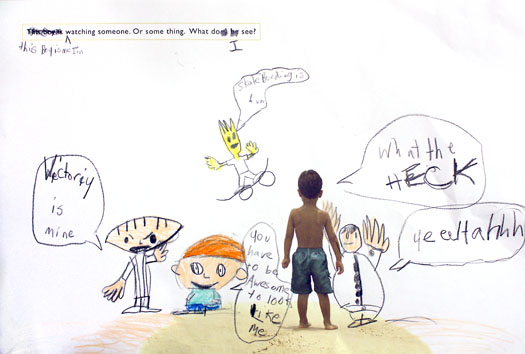