fotoplay: what is a prompt? 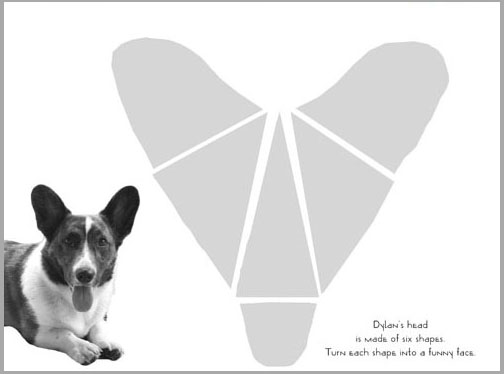 What is a teacher really doing when they give a written or visual prompt to a student? Are they prompting them to do something specific? Or are they prompting them to simply do something?  I’ve written before, here and here and here and here about prompts. I’ve thought a lot about the concept of a prompt, and why I find it so compelling to watch people respond to them. And while I love to see the presence of the prompt in the completed work, I find it just as exciting when the prompt is obliterated, covered up, or responded to in a seemingly oblique way. Plus, because my Fotoplay pages have both a visual and a written component, it’s likewise oddly cool to me when the written component is disregarded or discarded.

As with the page below. You saw the original page, with six grey shapes and a prompt that suggests turning those shapes into funny faces. Here is the clever response by Tori, age five. 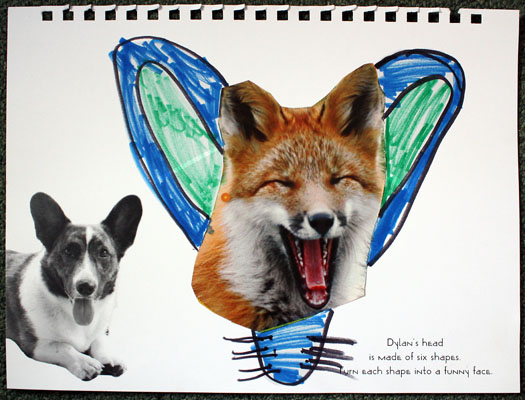 A prompt is an invitation to play a visual game. 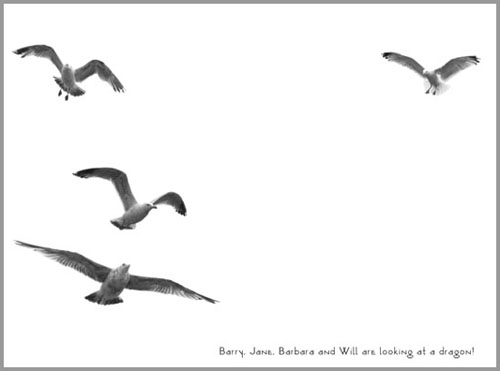 Tori also chose to complete the Fotoplay page above. And this, below, is how she responded. Look how she turned my line of text into the arms of a body for the owl. 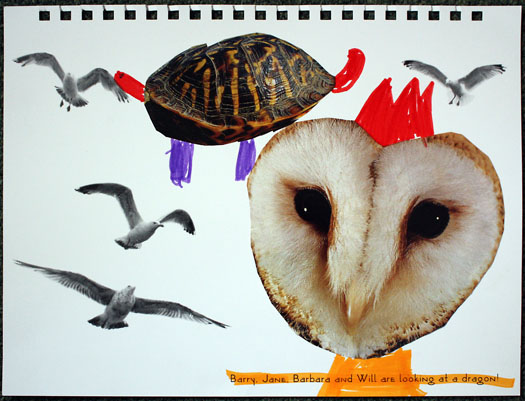 A prompt is an armature on which to hang one’s own designs. 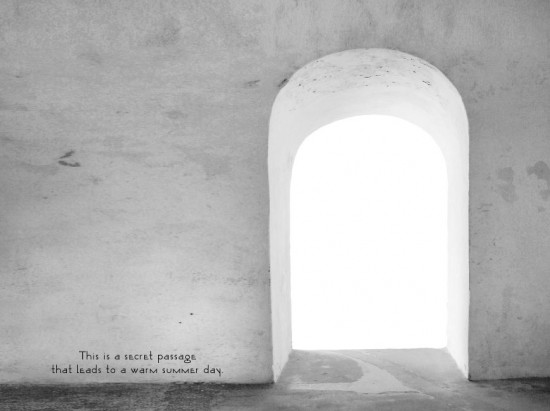 Tori went on to complete this page. First she filled my doorway with pearls, then created her own second doorway and placed the pensive figure of a young woman inside of it. 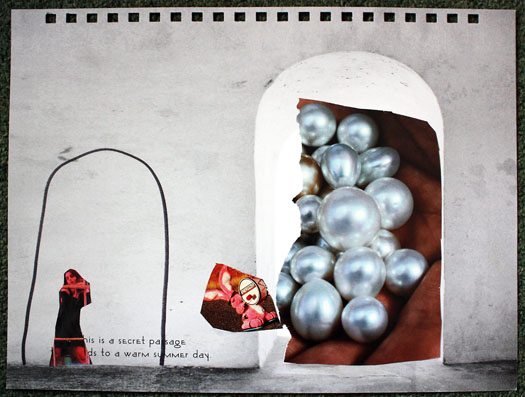 A prompt is a mirror to reflect one’s own imagination. 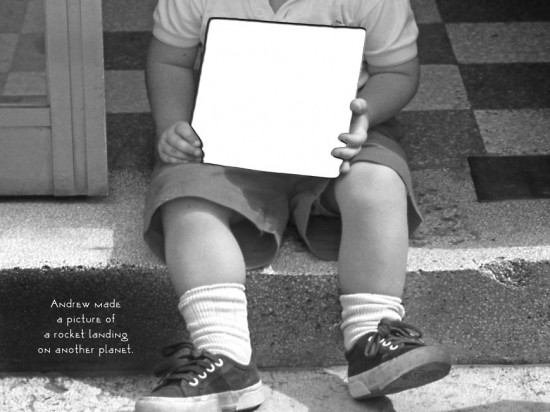 Ayla, age nine, approached this page. Instead of literally drawing a “rocket landing on another planet,” she created, with two carefully considered collage components, the feeling of flight and space, celestial and oceanic, with an adorable, graceful creature soaring away from the page, moving between two worlds… 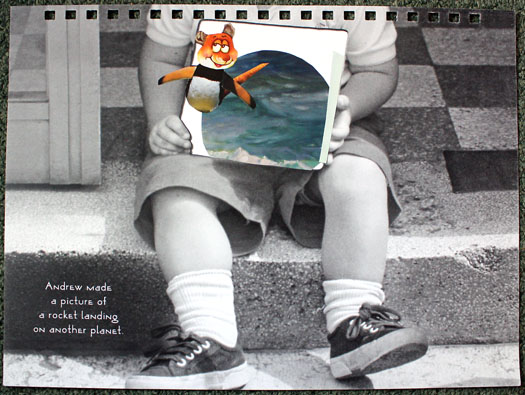 A prompt is a springboard from which to fly away. 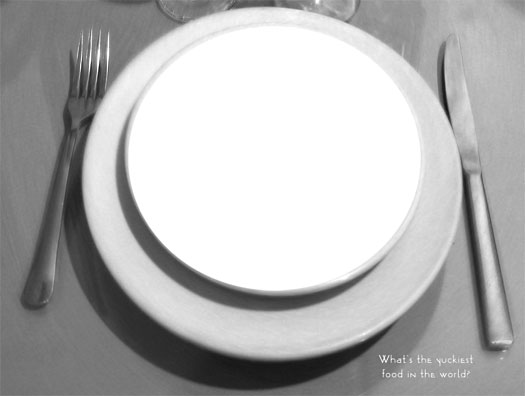 The page above was completed by Peggy, one of the teachers at the Starrett Children’s Center, whose poetic work I wrote about in an earlier post. Peggy responded to my prompt, both literally (writing an elaborate food-related story) and compositionally (swirling the text around and around the circular plate)… but that was just the beginning of a long, elaborate creative process, with a journey back in time to 1996 when she traveled to Beijing, China. Peggy’s page evolved into a fully developed painting. 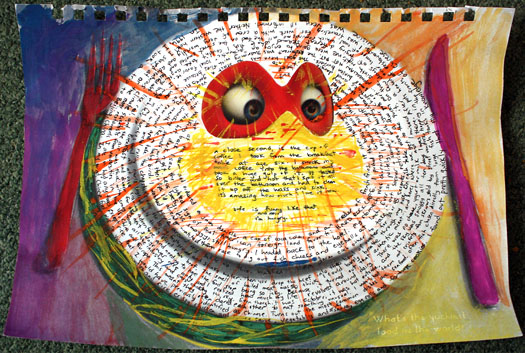 A prompt, like a sketch, can be an underpainting. 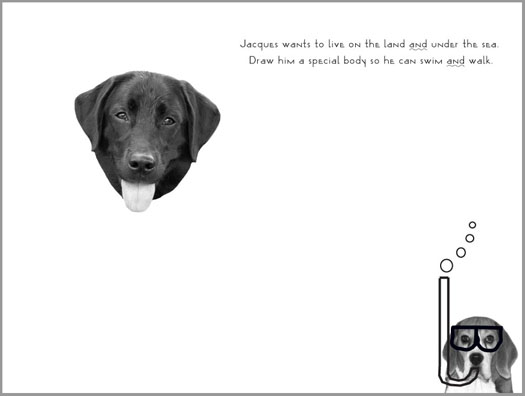 While Peggy was working on her page, four year old Leah completed the work below at a nearby table. She might be too young to read, but she’s not too young to create a complicated, multi-layered collage. 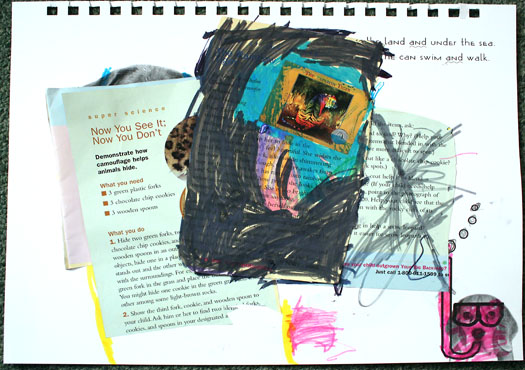 A prompt can be just the first sentence in an unpredictable dialogue.